my dad and i drove to the store, and as he rattled off the things i was supposed to remember,

i was petitioning the void of moms for both answers and validation.

what do i do, moms? i hadn’t spent 2 seconds worrying about what to do in the event that i would have to leave my 6-month old nursing child for half a day…. and much less with a dad threatening to feed him ice cream….

i had almost decided not to go to what would be one my my favorite things i have ever done in my life: the taping of the Sing Off. but cc insisted, sure that it would be a huge regret. as per usual, he would be right.

i took your advice, grabbed the formula that seemed to have the most positive reviews from my fellow moms, and handed my oblivious child over without lookin back, my beating heart finally slowed.

then my mom and brother and i squealed our little 14-yr-old girlish way into Sony Studios for the night {the 6-hour-long taping}. 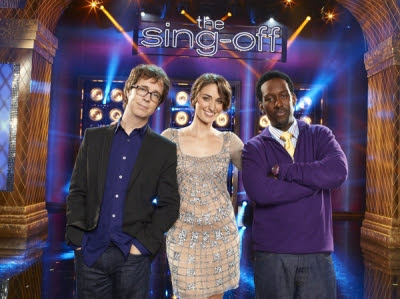 we sat next to a set of very emotional and proud parents that were so fun to watch.  you would think we had a few drinks before we showed up, but since they don’t let you leave for food, we were there, with some of the most talented entertainers, a host that believes he’s God’s gift to the job, and we were sleep/food deprived crazy people who were voiceless in the morning.

they run through the opening number 4 times for angles and sound, but we didn’t mind.
nick lachey refused to stand up straight even one time, even though we told him to every time. and i swear i could score his voice to music. not in a good way…

every number blew us away. we have our favorites, but cause we sat next to parents of katie from urban method {who rocks}, friends of afro blue {who are the most musically sound of any group yet}, and the director of vocal point {who are arguably one of the more entertaining groups}, we made our favorites known.
i also happen to think delilah and pentatonix rock too…

at one point between takes, mckay from VP looked up to the audience to point out his girlfriend, and i waved back, the rest of the night i waved to a confused mckay and tried to get a face of recognition back… we amused ourselves for hours… you might hear us shouting his name if you watch the show…

yep. that would be us, not his obviously far more mature girlfriend…

later, they had a singing competition {off-screen} for the audience and i got so crazy screaming for rob that they asked if i was drunk. my reply, “go BYU!!”
{we are kind of music and singing people in our family….}
we get a bit excited…

after all of the performances, the judges took their sweet time deciding, so we left, before we found out which group went home. so i will be just as surprised as you… which i kind of love.

B was asleep when we got back to the house, and i was later told he completely refused the formula, and somehow still fell asleep. tender mercies.

cc drove to LA while i was at the taping, so i didn’t see him until morning.
he asked me how it went, and through my raspy smoker-remaining voice with black sacks under my eyes, i told him,

“that was the funnest thing i have ever done…”
and it was. might go down in my top 5 favorite actually.

i hope you watch it. tonight.

and then i hope you call me to tell me if you see me.
cause you will definitely hear me.

see, i’m famous.
watch out, ellen, i’ll be there soon!