if it wasn’t my uterus, i would wonder… 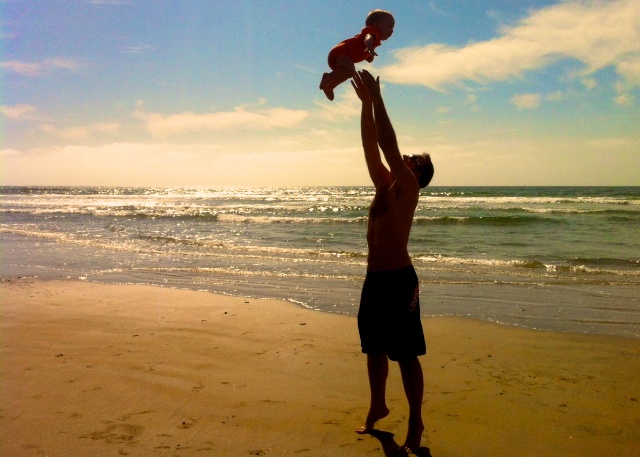 every day the little monkey is turning more and more into a boy.
its like watching a time lapse… on “rise of the planet of the apes.”

everyday he learns something new, takes a fall, then learns how to avoid it next time.

he is pleasant, well-mannered, plays well with  around other kids, but isn’t all too excited when they get too personal.  he likes his space, his freedom,
and the ones he loves.

he has his daddy written all over him.

everywhere we go together as a family,
{stop me if you’ve heard this one,}
some stranger starts cooing at B until they remember he’s a stranger…
then they’ll usually comment on how much he looks like his dad.

its true.
but its not just that.
he will be the kid that can run all day,
eat anything and everything, go back for seconds,
and not gain weight if he tried.

he has beautiful olive, easily-tanned skin and long pretty eyelashes…
big huge brown eyes that he’ll have to grow into someday, though i hope he doesn’t…
also dad.

lately he’ll even tug on his diaper when its ripe and whine just enough for you to know,
but not enough to evoke true disgust.
if it’s real bad, he’ll just go bring you the diaper, throw it at your feet and wait for you,
the big dumb human, to figure out what he’s been trying to say all along.

if it has wheels, makes noise, or opens and shuts, he’ll play with it for hours.
{or if it has an i in front of it.}
i don’t recall ever showing him what a car does,
but one day he found one, hit the floor, and started riding all over the house.
he IS his dad.

and when its time to nap or sleep,
{which is still twice a day},
he practically puts himself down.
he plays hard and sleeps hard
and like his dad, if i let him, he’d sleep all day too.

sometimes i catch a glimpse of B on his dad’s lap, or watch them butt heads while they eat and giggle.
the way they move in sync is eerie sometimes…

it really is so fun to have 2 of them around.
my little guy smiles and plays with me all day,
and the big one comes home to pick up where he left off.
positive reinforcement is what that is.

little man is like his dad more than i think he’ll ever be like me.
sometimes i worry when i see him get so melodramatic and i think,
“who taught you that?!” ….oops.
well, mom has to fit in somewhere…

but i also see him starting to fight for himself.
take a stand when those older nursery kids take his toys.
he’s still not forceful, but at least he tries to stand ground instead of walking away with nothing to care about.
that’s got me written all over it.

one day i’m sure this little guy will burst into song
or decide to paint or dance instead of play sports.

then we’ll know for sure.

after all, i didn’t get to watch them cut the kid out of me…
{cue twilight zone music}